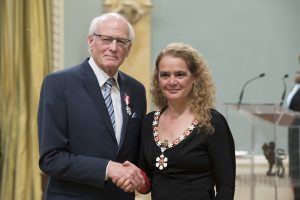 John Lord lives in Kitchener-Waterloo, Ontario, Canada. This photo is from May 2018 when John received the Order of Canada from the Governor-General Julie Payette at Rideau Hall, Ottawa.

John has been a leader and founder of several local, provincial, and national initiatives designed to create positive change in human services and communities so that vulnerable citizens can achieve full citizenship, participation, and equality.

In 1982, John was a founder and first director for more than a decade of the Centre for Community Based Research.  Located in Kitchener, the Centre has had a major impact on community research approaches across Canada. John and his colleagues pioneered community based research in human services. The Centre has also played a major role in leading-edge research related to new paradigm approaches in mental health and other areas of vulnerability.

John has been a founder of several local and regional projects:

John has completed research with the independent living movement in Canada since 1985. This work has been instrumental in helping Independent Living Canada to gain insights into their own work and to build their research capacity. In 2010, John completed a book on the history and impact of the independent living movement in Canada. Called Impact: Changing the Way We View Disability, this book is available through the publications section of this website. Independent Living Canada honoured John’s work in 1999 by creating a research award in his name. See www.ilcanada.ca.

John has been a leader in researching, writing, and speaking about the new paradigm of community and disability. His first detailed writings appeared in 2001 in a co-authored booked called Shifting the Paradigm in Community Mental Health: Toward Empowerment and Community. This booked can be ordered from University of Toronto Press.

Building on that work, John has written extensively about what he now calls the New Story, a new paradigm approach to supporting vulnerable citizens in community. The idea is to create options for people that involve several key elements – individualized funding, independent facilitation, social network and relationship development, self-help and family networks, community engagement, and person-centred approaches. When taken together, these approaches create opportunities for people to experience creative supports in community and full citizenship. See John’s publications to explore these ideas further, as well as the web site of the Individualized Funding Coalition for Ontario.

As a family member with a daughter with a disability; John and his partner Peggy Hutchison, a retired faculty member at Brock University, have created an inclusive life for Karen, who has a “support circle” that walks with her through life and community. John and Peggy have completed a book on several innovative projects across Canada that reflect the New Story and networks that enable people to be embedded in community. Released in 2007, with a revised second edition in 2011, Pathways to Inclusion: Building a New Story with People and Communities, is available through the publications section of this website. Their book on relationships, written with Karen, was published in 2010. It is entitled Friends and Inclusion, and is also available on this website.