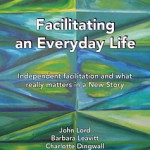 Independent Facilitation and what really matters in a New Story

Independent facilitation frees facilitators to be dedicated to citizens who experience vulnerability because of labels, disability, chronic illness, poverty, or aging. Facilitators are independent of biases from others such as service systems and funding bodies.

Independent facilitation puts belief and hope in community because that is where relationships and safeguards play out for all of us.

Independent facilitation flourishes when it is embedded in community, in facilitator networks, and is supported by local action and government policy.

This book is for people like us, people who want to make a difference, who want to feel free to be dedicated to a person; to citizens who experience vulnerability. People who want to use an effective process that is a change maker. Independent facilitation is an emerging craft. Facilitators in the New Story believe that community is always the answer. We reject approaches that do not lead people to relationships in their community. And while independent facilitation may touch the service system to access supports for a person, it is independent of agendas, expectations, and accountabilities of service systems.
John, Barbara & Charlotte

This book is an examination of various perspectives on disability that provide insightful discussion on the current need for social innovation to move vulnerable citizens from areas of exclusion to social inclusion. It offers a straightforward approach to addressing the organizational strategies that have been used in the past and highlighting areas for change.

2nd Edition can be purchased here.

To order: Click on “Add to Shopping Cart” then click on “View Cart” to continue placing your order

This summary of John Lord’s reflections was given at the closing plenary at the 50th Anniversary Conference of the Canadian Association for Community Living in Ottawa .  November 2008

Individualized Funding in Ontario: Report of a Provincial Study

This article appeared in the  Journal on Developmental Disabilities Communicator, Volume 14, No.2,  2008

The Evolution of Community Supports: Sorting Out What Really Works!